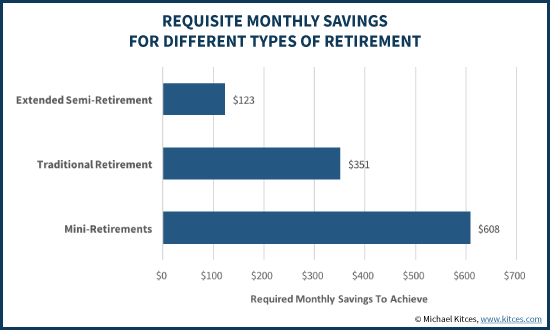 According to an excellent blog article by Financial Advisor, Michael Kitces, there are 3 common ways people retire:

What’s eye-opening in his presentation is the effect these choices have on how much you’ll need to save, depending on which “retirement” you plan to do.

I’ve included one of Kitces’ graphs with this post, and you can see the dramatic differences in how much the average American would have to save each month, depending on retirement model. They range from $123 a month for extended semi-retirement to $608 a month to support multiple mini-retirements.

This is what most Americans end up doing, and I don’t think it’s by choice for many of them. I believe they end up working, at some level, as long as their bodies will let them…because they HAVE to.

I’m not demeaning them. I’m just saying that this hybrid “retirement” is less often a preference than a necessity. And, to me, it’s more a symptom of middle-class-income-earner victimization than it is an indication of how much people love their work.

To be fair, many people continue productive activity into “retirement,” because they want to stay active and in contact with others. Some start their own business, some answer the call of volunteerism, and some stay at their original job because they like doing it.

The salient fact, as it relates to this article, is that continued income flow from work, even part-time, dramatically reduces the amount you’d need in your retirement nest egg to support you during those years. Hence, it requires less pre-retirement savings to support it.

This is the model most people dream about when you say, “retirement.”

“Continued medical advances over the past century have fundamentally shifted retirement, from a period of “worker’s obsolescence” (where forced retirement was a way to get older, less productive workers out of the way for younger, newer ones) into a world where retirement itself lasts so long that it’s actually a ‘phase of life’ – a post-work period of planned leisure, the culmination of a lifetime of working and saving.” says Kitces.

According to his graph, the average American should be saving at least $351 dollars a month, if they want to be able to do whatever they want, whenever they want, or even nothing at all, in their post-employment years.

Obviously, if you intend to live on Social Security, a pension (if you’re lucky enough to have one), and the proceeds from your nest egg, then your nest egg will have to be bigger. So, it will take more savings over a typical working life to build that bigger nest egg.

These “temporary retirements” or sabbatical breaks at multiple points during one’s working life present an uncommon option that some find intriguing.

In this approach, withdrawing from the workforce (retiring) is not something delayed until the end, but rather shorter, temporary breaks are taken throughout one’s working life. These sabbaticals could be more frequent, short breaks; or less frequent, longer pauses.

While it might seem that this model could require less savings overall, because the final retirement phase is shorter than in the traditional model, it actually takes substantially more monthly savings to support this plan. The reason is that savings never get into the later, greater years of compounding. The nest egg is frequently drawn down and then restarted, so compounding never gets going with any vigor.

Another consideration in this model is that, since one’s working years would be broken by periods of unemployment, career development could be stilted, potentially limiting peak income.

On the other hand, employment breaks could present opportunities for changing careers, adding spice to what might otherwise be a long, less-interesting work-life.

The pros and cons of each strategy are clear.

You, and those who will share the future with you, should discuss these options, make a plan, and then stick to it. A plan that is not at least attempted is a waste of paper and ink or bytes of computer memory.

In the meantime, imagine your life following each of these strategies. Which one makes you smile?